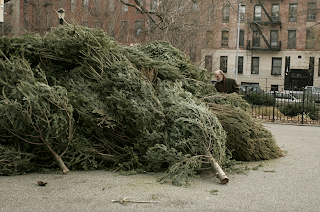 Imagine this pile of trees surrounded by 20 firefighters busily unloading cars in a Rona parking lot and you have a pretty good idea of how I spent the first Saturday in January. My friend Mark, who goes every year to the City of North Vancouver's fire department "chip up" fund raiser, convinced me to join him there. We were served good food, collected a lot of money for charity and even had the rain hold off.....so the event was a success in my books. And with everyone driving mini-vans and SUV's these days, it was useful to have someone with long arms around to untie all the trees strapped to the roof.

This past weekend I also spent with North Vancouver fire fighters, this time ones from the District. I successfully navigated the interview last month to become one of 5 candidates invited to a "Station Orientation" weekend. Although my skills, having been mostly unpracticed in the more than 2 years since fire school, were understandably rusty, the relaxed and friendly atmosphere of the crew made for a pretty fun weekend. However, I was put on the spot a couple of times. Putting on a short presentation about AED's didn't rate as stressful. Having to come up with a joke....on the spot.....pretty stressful. At least there were no stipulations on the joke being tasteful!
Posted by Ericandles at 6:51 PM