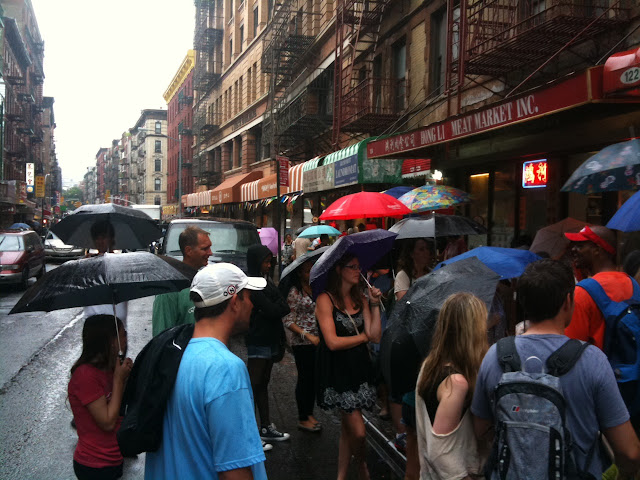 I'm sitting in a cafe on 7th avenue in Brooklyn after the end of the Police and Fire games opening ceremony. Well, not really the end of it...after two hours of standing and walking in the hot sun, we gave up on hoping to see the ceremony and left Prospect Park before it even began. I figured there's better ways to spend my time in NY than baking in a park with 16,000 other emergency personnel.
Besides, I've already spent a lot of time on my feet. I took a red eye from Seattle Wednesday night and got a few hours of contorted sleep (planes aren't meant for 6'6" people) on my way to Milwaukee. A few hours later I took off to New York and landed in La Gaurdia at 11am. I was at our Harlem condo by noon and on my first walking tour by 2pm. I brought 3 other guys from team with me, but only 1 made it to the end with me. The tour was the "Historic Districts" section which took us through Soho, Little Italy and China town. The picture below is of our group right on the border of the Chinese and Italian districts. The most surprising thing to me so far is how incredibly quickly and distinctly the districts change character. Within one block, all the pizza, pasta and cheese changes to hanging ducks, seafood and rice.
After the tour I met back up with my team mates for a few beers before going to the convention centre to register. The lines were long for this and I'm pretty sure that things are going to get less organized and more chaotic as the committees have to deal with the oncoming hurricane that is barreling down on us in the next 48 hours. Predictions are for it to be a direct hit on Manhattan, with most services being completely shut down around the city.
This morning I went for a great walking tour around Lower Manhattan. There's so much history here and so many familiar places....even though I've never visited here before. We went to Broadway, Wall street, Bowling green, city hall, Trinity church, the World Trade Centre site and much more.
I really love the feel of the city. There's so much happening, so many different areas and I feel like I could explore for years. However I only have 9 more days and shouldn't waste any mote sitting in Starbucks.
Posted by Ericandles at 12:19 PM