Ugh. I must post more often, because as I have stated here before...the catch-up post kills me. It is a vicious cycle. I haven't posted in a while, so I kind of put it off because it seems so onerous to get it all in. Then, because I put it off...it gets even more onerous.

We had a good weekend. First off, the kids got to witness their dad participate in his first community event as a real fireman. What do real firemen do at community events, you ask? Fire demos? Cool truck tours? Probably sometimes. Not this time. 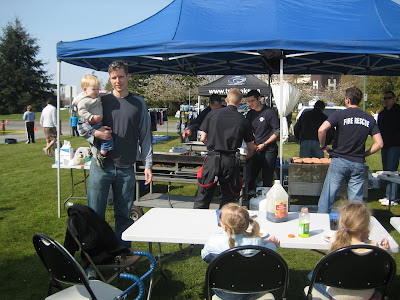 We went out to Ladner to see Eric cooking pancakes and sausages as a fundraiser at the Delta triathlon. We got a great breakfast and it was pretty terrific to see Eric out with the firefighters, working hard for a good cause. And not surprisingly, the firemen grill up some tasty grub. Luckily, the girls brought their appetites and impressed the guys with how much food they could stuff into their little bitty bodies. 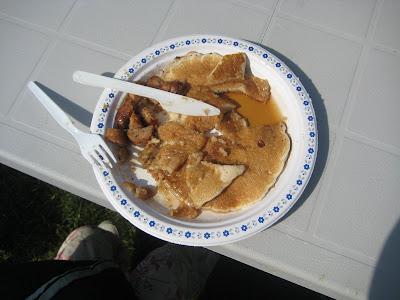 We also managed to get in our first all-family bike ride of the season. Ok...ever. Alright, you got me. The truth is, I haven't been on a bike in probably ten years. But I guess riding a bike is a bit like...riding a bike. You don't forget how. It was a beautiful evening, so we packed everyone up and pedaled over to Vanier Point. The highlight for me, other than the sunset and exercise, was Eric toting the girls behind him. For the entire ride back, they chanted "faster, faster, faster". It is all uphill to get home. It was great fun to watch. Luckily for me, Lukey isn't much of a chanter. 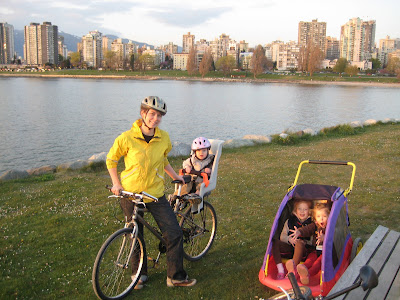 Here is the best picture of Eric I have ever seen: 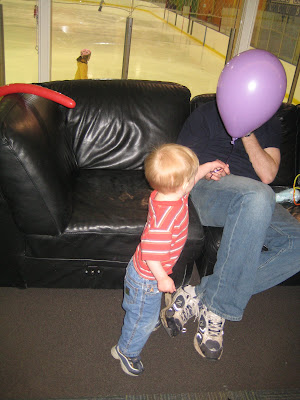 I apologize. That's mean. Can I make a joke about him being full of hot air? I'd better not. I think he reads this blog.

Oh, and one more fun weekend thing: the girls and I went to a big school garage sale on Sunday and scored. For $7 we walked away with two puzzles, three games (including Pop-o-matic Trouble, for you '80s kids), two dolls and four videos. It was a bit of a nostalgia purchase for me because one of the videos is Annie (the others were Peter Pan, Stuart Little, The Sound of Music). The girls have watched Annie twice. They are singing "It's a Hard Knock Life" and "Tomorrow" non-stop (totally mangled of course, which is even better). The only song they didn't like was "Dumb Dog" because they thought it was mean. I tried to explain that Annie was an orphan who had attachment issues but they weren't buying it. Molly was sincerely terrified when Annie was chased up the railway trestle by Rooster at the end of the movie. She cheered out loud when Punjab (!?) unwound his turban to rescue her by helicopter. Little Girl Me thought Punjab was exotic and exciting. Adult Me is seriously questioning the appropriateness of the that role and the casting of an actor who...clearly is not Punjabi. Other than that though, I have to say that the movie holds up pretty well for me.

Has anyone else managed to foster affection in their children for one of their old favourites? Anything you were disappointed to discover has not weathered the storms of time well? I must admit to being a little shocked by the negative treatment of "Indians" in Little House on the Prairie. The book lover in me is definitely bothered by editing Laura Ingalls Wilder as I read aloud, but...yeah. I just wasn't comfortable with some of the depictions. Anyone else?
Posted by Ericandles at 11:57 PM

Hello I am definitely guilty of on numerous occasions attempting to get my two young BOYS to watch Anne of green gables. Sadly they have no interest in the rambling of little red head girls about bosom friends etc... I also have a childhood love of Annie and watched it or part of it recently and saw it as well as many other movies from my childhood very differently. Once in a while I find myself singing "the sun will come out tomorrow" to the boys at bedtime, I love that one. There should be a lovely monkeys delivery boy (husband) stopping by this afternoon with a little white box!
Hope you have a great day!