Just under a month ago I wrote another entry about my quest to get hired as a fire fighter. I haven't updated anything on the blog since....not because I am trying to keep my disappointments private....but because I just haven't heard anything yet. I interviewed with the Vancouver fire department on January 8th and won't know my score (which determines if I am offered a job) until the beginning of March. The North Vancouver process that I have been going through since September is still not completed. I recently went to a second interview there and will likely be put on a (could get hired- depending on the number of retirees) list with 3 others. At this point however, I really don't know how this list works or the likelihood of getting pulled from it.

I have spent the last few weeks going through a speedy but intense process in Delta. In less than a month since the applications closed, I have already written a test, done hall tours, gone for an interview and started my ride along process. The ride along is 3 full days of working, training and responding to calls with different crews from Delta Fire and Rescue. I have been issued my own turn out gear plus SCBA and asked to demonstrate my skills with ladders, hydrants, hoses, ropes, searches and of course hall duties. The days have been long and challenging, especially for someone who hasn't gotten to work on his skills much the last couple of years. However, all the guys I have met have been great and have made the days go by more quickly and comfortably than I might have expected.

If things go well, I will have another test and interview next week. I estimate that, between the tests, interviews and ride-alongs, I will have spent between 40 and 50 hours on this one process alone. One might guess that this would mean the odds of landing a job are pretty good. However, even at this stage in the process I still have less than a 1 in 3 chance of being hired. Although that's not great odds, it sure beats the 1 in 50 odds at the start of the process.....and it would be a fantastic place to work if I could get it.

In addition to my 30 hours in Delta this week, I have worked on the Canada line for another 48. We have had some big delays because of an oil contamination on the boring machine (it has 6,000 litres- making for a difficult oil change) which has prolonged our round the clock work schedule. Les has had to bear the brunt of my absence by having less help than usual with the kids.

I did get one afternoon with Finny though, and luckily it was a sunny one. Molly, who was at school, had asked Fin to take care of Baby Jack, her little stuffed elephant that has been a favorite since birth. Fin, who seemed particularly excited by the responsibility she'd been entrusted with, was quite torn when I asked if she wanted to go for a walk. "I really want to, but can't leave Baby Jack". When I suggested she take her mini baby bjorn, she was thrilled. We went up to the bank, Shoppers Drug mart and checked out our local firebombing site. It was such an ordinary afternoon (minus the firebomb) with errands to take care of and to-do lists on my mind. However, as Finny coasted down Broadway with Baby Jack on her back, dodging pedestrians and pointing out all sorts of new and wonderful things to me, I couldn't help think how much my heart will ache one day realizing that these "mundane" moments are all behind me. 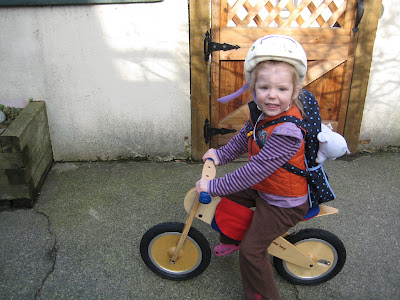 Posted by Ericandles at 9:55 PM