I always thought their coffee tasted a little burnt...

So, our local Starbucks exploded. 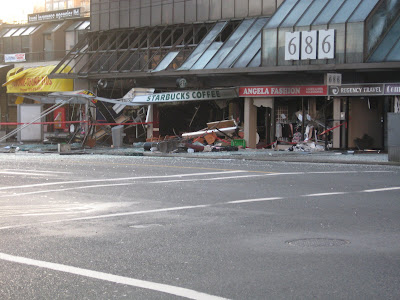 The word on the street is that the sonic boom sent out by the blast was earth shattering. Apparently we sleep like the dead because no one here, less than one block away, heard a thing. Including three little people who are pretty light sleepers. Eric was at work a few blocks away and he thought it was an earthquake. Me.......not so much, what with the still sleeping and all.

When Lucas finally did wake up at about 6:45 (only because Eric and I were chatting loudly...hmmm, how loud were we? The kid slept through an EXPLOSION!), the two of us took a little walk up the hill to investigate the damage. In person, it is quite a shock. In fact, the CBC cameraman standing behind me said it reminded him of Kandahar.

I also took the precaution of placing a very early morning preemptive phone call to my parents. I didn't want them to wake up to the news that our block had been sent skyward without knowing that we had not been taken with it. You know, up to the big cappuccino machine in the sky. My dad seemed relieved that we were alive, but probably more relieved to get off the phone and continue sleeping.

I also noticed that the photo the CBC had on its website was grainy and weak. I sent them my picture, which they published here. You didn't know I was into photojournalism, did you? Me neither. I guess I have a nose for a good story...just not much of an ear.

UPDATE: My picture is now on the main news page here. So funny!
Posted by Ericandles at 10:19 AM

Good eye, yes I do live in Vancouver co-op. which one do you live in?
Lovely Monkey blogger other wise known as Carolyn or Margaret.

Nice pic! I read the news story and voila, the picture is yours. I LOVE the little baby bird story. So cute ")