When I think about what I why I want to blog, it's to try and capture the fleeting things...the feelings and the events that aren't the big milestones or unforgettable moments. So much of what is lost in time is the impermanent and unremarkable stuff.

Like eating dry Cheerios on the floor of our bedroom on a Saturday morning. Why? Because we still have no downstairs, no kitchen, no dishes or silverware. It has been one big carpet picnic all summer. 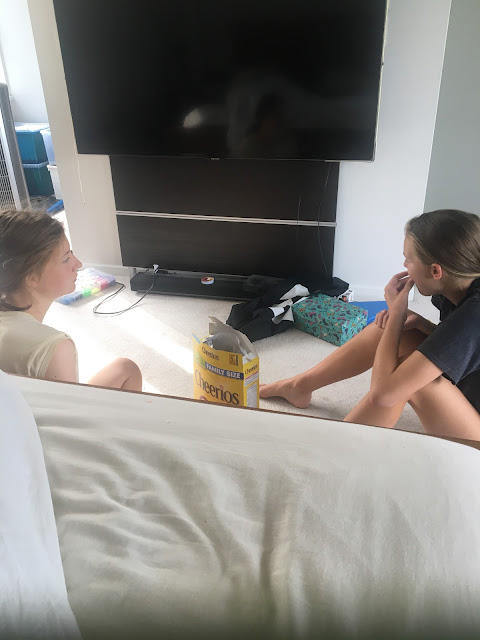 Eric and I had a nice slow morning. Apparently we are either too old or too stressed to sleep in anymore, so we chatted and worked in bed. Then the kids slowly come upstairs and banquet on our floor.

Finny and Eric left to work out a bit and we planned to meet at Jacquie's 70th birthday at the Hall's. We watched some of the US Open (first Canadian to reach the finals, let alone win it!) and then Eric called to say that he would have to help out at our girls tryouts because we were short staffed. We did a typical Butler event, as all five of us were there together for about 30 seconds. Eric left, Finny and Lukey had a big fight, I took Finny home and Lukey stayed outside...Molly and I had a delightful visit and some yummy cake :)

Finny had tryouts, but was in the doghouse, so had to bike. I didn't go at all...which is nice. I love working with sports and kids. I believe wholeheartedly in what we do, but I don't love tryouts. Not because I hate to see kids give it their all. But because I hate to see kids give it their all and get cut. I know, I know...that's sports. In fact, when I think about our own kids sometimes getting cut (like Lukey this year at hockey), I value what they learn from trying their best and not succeeding. If you always get what you want, what do you learn? I truly believe in all parts of the process, even (or especially) the occasional failure. But, do I want to do it? Or look at their little faces? Uh, no.

Lukey is at Arden's tonight for a sleepover. The comfort of an old friend in a week full of new experiences.

And by the way, I have decided to set a goal and a reward for myself for blogging. If I blog every day until the end of October, I will get myself the new iPhone with the awesome camera. Motivation.